The real Alaskan trip began today. After a good sleep in, we took the Puffin shuttle bus back to the airport to hop on to the next shuttle bus to our RV rental – Great Alaskan Holidays (GAH). 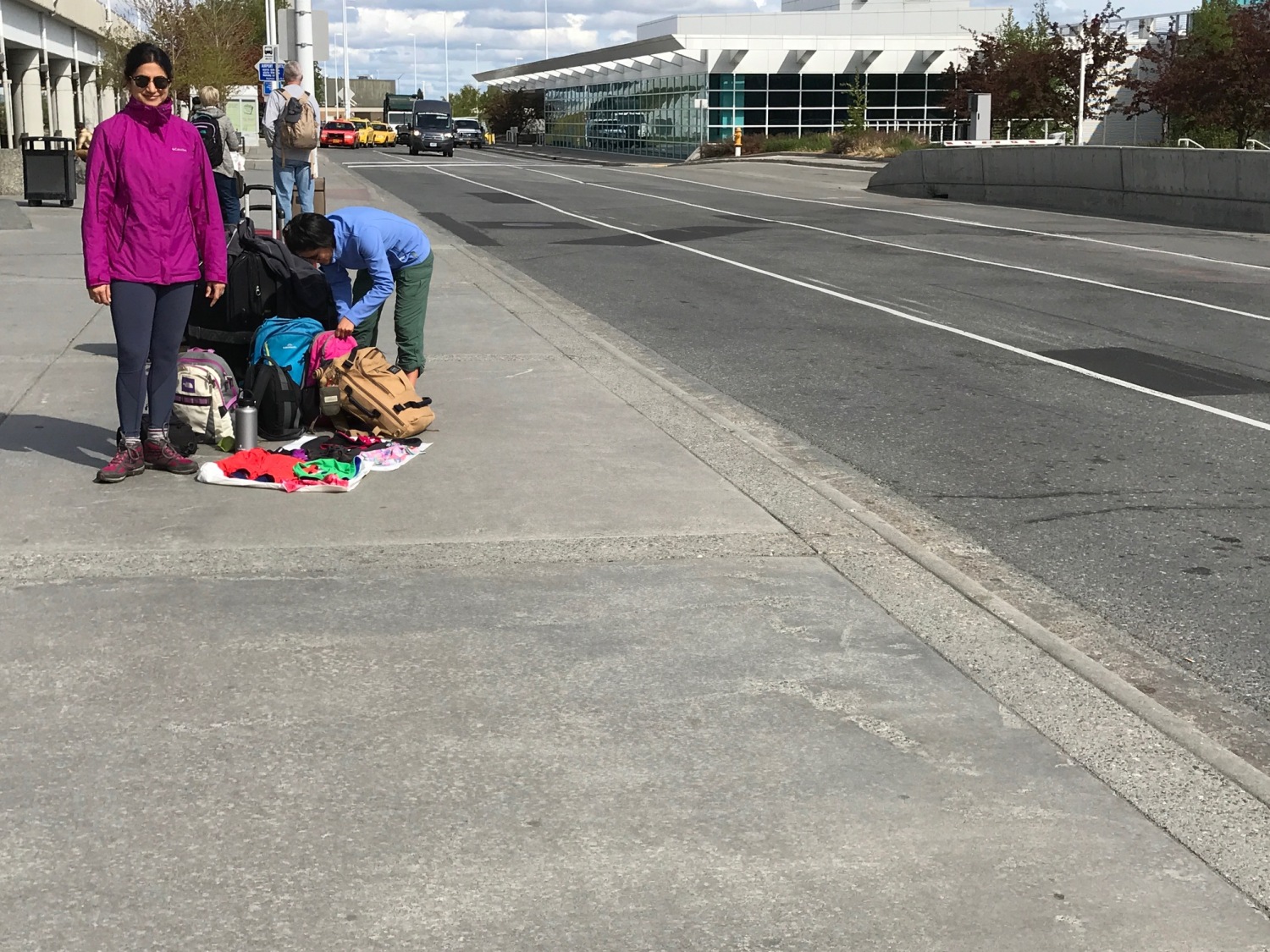 As soon as we got to GAH, we were led into a room for our 45 minute orientation video, which was great. Being from a cosmopolitan city like Mumbai, we were complete newbies to ‘RVing’ and campervans, although we had seen plenty of them on prior trips around the USA and Europe. It all sounded too complicated for my liking but really cool at the same time. We didn’t have to worry about hotels for the night or what we would eat as we had it under one roof (with wheels).

Happy that we finally got our Winnebago for our ten day road trip. Off we go!!

Whilst driving an RV is just like anything else – you just have to get used to it – it’s good to delegate tasks to your traveling companions. Now I’d never heard of grey and black water till the demo video, but straight away I knew whose task the removal of the same was going to be – the one who is least likely to want to carry out such duties – Amrita (my cousin). It was a unanimous decision (other than her of course) to designate her as the official “Sh%$ Removalist”. I will share more about this further on in this blog.

Being the designated driver for the entire trip (thanks to my brother not getting his international license), I already had a big ask. Whilst I certainly enjoy driving, getting used to the almost 30 foot Minnie Winnie initially was quite an ordeal. I clearly recollect the first 10 miles once we left GAH, I was kinda stressing out and thinking – how do I turn this thing around? How do I make a U-turn? etc etc. The best part was our first stop was the grocery store and Walmart was very close by 4 minutes as per Google Maps, but that involved a U on the freeway. There was absolutely no way I planned to do that where speed limits were 55mph. So I managed to find an exit and get back and we were in Walmart 10 minutes later than what Google told us.

Hundreds of dollars later, it felt like we wiped out the entire grocery section at Walmart

The grocery shopping experience turned out to be an experience in itself with blue skies turning into a crazy storm but 1 hour later and $$$ spent on groceries, we got it altogether, and set off on what was a stunning drive for the first day. When driving south from Anchorage, the scenery involves snow covered mountains, greenery and this water inlet which comes off the fjords – absolutely serene.

The objective was to drive to Portage this day, but somehow we skipped that and drove through the tunnel to Whittier.

Finally arrived at Whittier (not that it was a long drive, more the relief that we made it through Day 1 and no damage to the RV)

Whittier is essentially nothing but a small fishing village that is now used for tourism. We were set to have a cruise on June 1st, but arrived a day early and hoped to find a nice RV park. What we were resigned to was some sort of car park for large vehicles. As we arrived in the evening around 5-6pm, we didn’t find anyone to ask where to park nor did we see any signs for paying a fees so left the vehicle there. 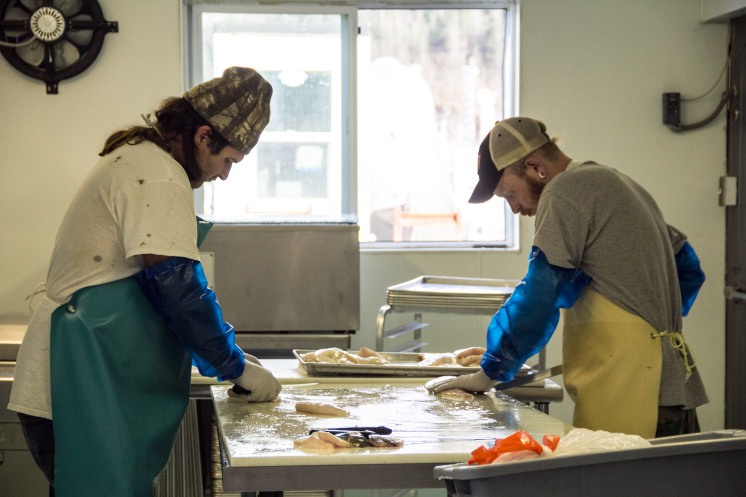 Just taking it in (kind of)

We went for a walk along the promenade (if you can call it that) and took in the wonderful views of the mountains and water. Came across a little store where they were filleting the fresh ‘catch of the day’. We decided to hang around and check out the only lodge in the town (The Inn at Whittier) which has sweeping views. They did a nice hot chocolate for being located as remotely as they are. A quick Peruvian quinoa dinner back in our RV was a great way to end our first ‘real’ day in Alaska. 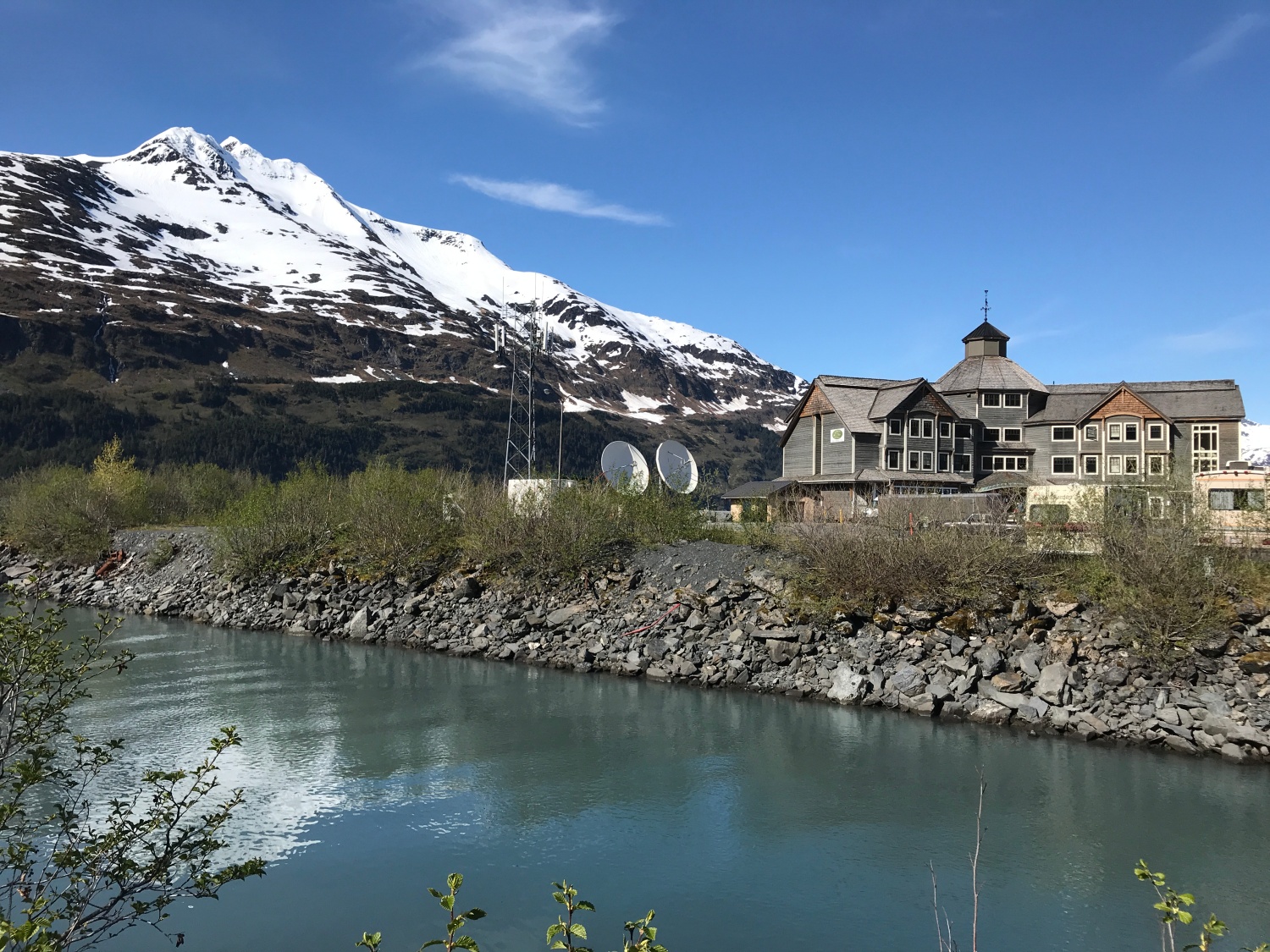 Cute little place in Whittier – the only real accommodation around